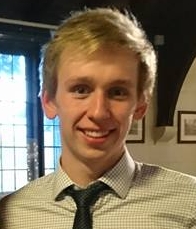 Wil grew up in Shrewsbury and attended Meole Brace Secondary School then Shrewsbury Sixth Form College prior to taking a gap year to go travelling at the end of 2017. He spent time in Australia and New Zealand and returned home at he end of June 2018.

Wil has been a member of Shrewsbury ASC since the age of three, has swum competitively since he was nine years old and has twice been Boys’ Club Captain.

He has competed at Regional Championships and represented Shrewsbury ASC in Relays at the English National Championships. In 2014 Wil swam at the Queen Elizabeth Olympic Park in London as part of the National Schools’ Biathlon where he came 13th in his age group. Wil has taught members of Development Squad from 2015 until late 2017 as well as assisting with other lessons where learners were up to 70 years of age.

As well as swimming, Wil has enjoyed football too, playing from ages 5 to15 for SAHA Mustangs. He is also a talented musician, having been Principal Euphonium for Shrewsbury Brass Band and a member of Shropshire School of Music, performing at Symphony Hall, Birmingham as part of Music for Youth.

Wil is coming to the end of his first year at the University of Birmingham, studying Mathematics. He continues to swim whilst at university and competed in the BUCS (British Universities and Colleges Sport) competitions.

Wil is an ASA qualified Level 2 Swimming Teacher and will be doing the Level 1 Coaching course in June 2019. He is also a qualified Pool Lifeguard (NPLQ) and trained in the use of AED (Automated External Defibrillator).